Office of Technology Assessment at the German Bundestag (TAB)

Subject and objective of the study

Digitisation permeates all areas of life and leads to considerable upheavals. So far, in science and the general public, the resulting enormous opportunities and risks have been addressed primarily in economic and societal terms. However, digitisation is also accompanied by considerable ecological impacts, which are considered to be ambivalent: On the one hand, digitisation offers the opportunity to reorganise economic and social processes and – in particular – to make them more efficient with regard to energy and resources. On the other hand, the establishment and operation of digital
infrastructures (digital end devices, data centres, telecommunication networks) consume large amounts of energy and resources. A critical consideration of the energy consumption of ICT infrastructures is of considerable relevance, because – in view of the enormous potential benefits associated with digitisation – there is a certain danger that the negative environmental impacts involved might increasingly slip out of the focus of users, researchers and, last but not least, political
decision makers.

Against this background, the state of knowledge on the current and forecast energy consumption of ICT infrastructures was analysed, potential savings were identified and characterised, and ways to realise them were identified.

The energy demand of ICT infrastructures in Germany is currently rising.

For the TAB report, the electricity demand of ICT infrastructures (data centres and telecommunications networks) in Germany was determined based on sales figures, technical data on electricity consumption and use patterns of ICT components. The results for the reference year 2020 are as follows:

Energy consumption by 2030: Stabilisation or tripling?

The possible future development was modelled using three scenarios for total energy consumption (data centres plus telecommunications networks). In the trend scenario, which extrapolates the currently observed advances in efficiency and increases in data volume, the energy demand rises to 30.6 TWh/a in 2030.

Fig. Scenarios for the energy demand of ICT infrastructures in Germany until 2030. 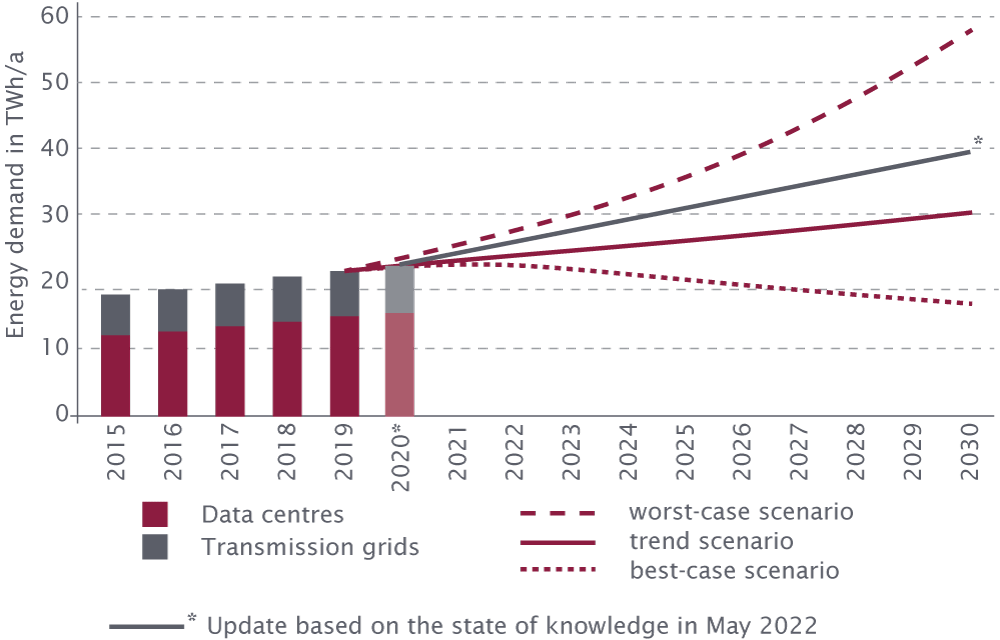 In the worst-case scenario, in which energy efficiency can no longer be increased as much in the coming years as in the past, an increase to 58.5 TWh/a is even conceivable by 2030. This would more than triple the energy demand of ICT infrastructures in Germany compared to 2010. In contrast, if the efficiency potentials were consistently exploited (best-case scenario), stabilisation and a slight reduction in the long term would be possible compared to the current energy demand. In this case, the 2010 energy demand level would be reached again for 2030.

The scenarios were based on the state of knowledge before 2020. The COVID 19 pandemic has led to an increased demand for cloud services and a significant increase in data traffic in mobile and fixed-line networks. From today’s perspective, a significantly stronger increase in energy demand to 39.2 TWh/a by 2030 is expected for the trend scenario. The assumptions for the worst-case scenario still seem plausible – while the best-case scenario no longer seems realistic. Stabilising energy demand at the 2020 level would already be a success.

The future energy demand of ICT infrastructures depends largely on the further development of energy efficiency. Through efficiency improvements, it has been possible in the past to keep the increase in energy consumption within limits in relation to the rapid growth in the ICT sector. Consistent exploitation of existing energy efficiency potentials is also advisable in the future. Therefore, existing technical and organisational options for saving energy in ICT infrastructures were identified and characterised.

Five promising savings options were analyzed in depth in the project. These are technologies or innovations that have a high energy-saving potential but are not yet widespread. There are also effective opportunities for German actors to influence the further development and application of these options. These are:

A blockchain is a tamper-resistant register, e. g. of transactions, that is stored in a decentralised way on many computers. The best-known practical application is the field of cryptocurrencies, which are, however, criticised due to their sometimes enormous electricity demand. The cryptocurrency Bitcoin alone is said to have caused an electricity demand of more than 100 TWh/a in 2020. This is roughly equivalent to the total consumption of the Netherlands. Responsible for this is the underlying hedging principle, according to which the execution of transactions requires a considerable calculation effort.

Tough, there are alternative concepts exist to secure transactions in a much more energy-efficient way. Within the Bitcoin network, however, there are currently no plans for a change. Since external intervention in a blockchain is not possible, the main options left for policymakers are to regulate trading in energy-intensive cryptocurrencies in order to make them less attractive to users.

Private use of digital media and the internet: drivers for the increase in ICT-related energy demand

Overall, the operation of ICT digital end devices in private households in Germany consumed around 15 TWh in 2018. A further 10.6 TWh/a was required in transmission networks and in data centers in Germany and abroad, with an upward trend for over ten years. The COVID-19 pandemic has led to a
significant increase in daily media use time and energy consumption – especially during periods of contact restrictions. However, this might have been a temporary effect.

The growth in consumption in ICT infrastructures can be slowed by throttling the increase in the volume of data processed. Software development plays a key role here, and greater attention should be paid to the criteria of data economy and energy efficiency of applications.

Smart buildings: significant energy savings through the use of ICT in buildings

In order to investigate how the use of ICT applications enables energy savings in other economic sectors, the case study of using smart energy management systems for the heating supply of buildings was chosen.

It is difficult to precisely quantify the saving potentials, as they depend on the technical systems used and – to a large extent – on the individual users and their decisions. Assuming that the dissemination of smart energy management systems is pushed forward intensively, the saving potential by 2030 can
be roughly estimated to be around 10 % of the amount of heat consumed in the building sector today.

Thus, smart energy management systems can make an important contribution to the energy transition in the building sector that can be implemented relatively quickly compared to structural measures. The current enormous price increases for fossil fuels are further boosting the urgency of taking efficiency measures for existing buildings.